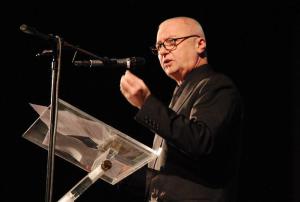 We are proud to report that Jurgen Faust of (M)T-Node has been awarded for the Plymouth University degree of Doctor of Philosophy. Congratulations Doctor Faust!

Prof. Doctor Ing. Jurgen Faust, born 1955, Germany, is a design professor who has worked in four different countries as a Professor forDesign, Theory and Media as well as an administrative Dean. He is a co-founder of a private university in Germany, as well as a developer of many undergraduate and graduate programs in a variety of fields.

Over the past years he has specialized in managing through designing and published about the idea transferring design methods and processes into the Management field, based on his work about a comprehensive theory to describe design processes.

He also taught design and design theory. He contributed to a variety of books and publications. In addition he is a practicing researcher, designer, and artist, who showed in many places, including museums and galleries in Europe, Germany, France, England, Italy, Poland and Slovakia as well as the United States. Faust is currently the Dean at Macromedia University of Applied Sciences for Media and Communication in Munich where he teaches Design and Media Theory, and is the Chief Academic Officer of the Istituto Europeo di Design (IED) in Milan, Italy.