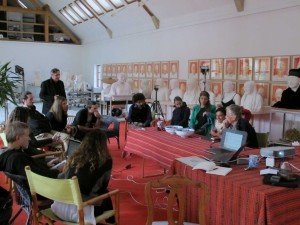 T-Node is an open and competitive Graduate Program. Designed to attract talented artists, researchers and scholars, T-Node focuses exclusively on Doctoral and Postdoctoral research, on Ph.D. and Research programs, achieving a significant integration between arts and sciences, practice and theoretical framework, research and teaching and promoting a full internationalization of research.

Students are provided with a team of supervisors for their research.

T-Node as a partner of Planetary-Collegium is concerned with advanced inquiry in the transdisciplinary space between the arts, technology, and the sciences, with consciousness research an integral component of its work. It sees its influence extending to new forms of creativity and learning in a variety of cultural settings.

Far from eschewing the study of esoteric or spiritual disciplines, it seeks to relate ancient, exotic, even archaic knowledge and practices to radically new ideas emerging at the forward edge of scientific research and speculation, and thereby to new forms of art and cultural expression. It seeks dynamic alternatives to the standard form of doctoral and post doctoral research while producing, if not exceeding, outcomes of comparable rigour,innovation and depth.

The Planetary Collegium is designed to produce new knowledge for the new millennium; new language, new systems, new structures, new behaviours, and new insights into the nature of mind, matter and human identity.

It takes a constructive and pro-active approach to the social, technological and spiritual aspirations of the emerging planetary society, while sustaining a critical awareness of the retrograde forces and fields that inhibit social harmony and cultural transformation.

The T-Node emerges from the successful experience of CaiiA-STAR and Planetary Collegium in its gathering of doctoral and post-doctoral researchers of high calibre whose work transcends orthodox subject boundaries, and whose practices are at the leading edge of their field. It works toward the projection of advanced research into the post institutional space of the 21st. century – a century in which the old academic structures are being replaced by research organisms fitted to the telematic, post-biological society. It combines the physical face-to-face transdisciplinary association of individuals with the nomadic, trans-cultural requirements of a networking community.

It is seen as a network of nodes strategically located across the planet, with each node eventually embodied in an architecture of unique distinction.

As an evolving organism, the T-Node can be understood by the questions it seeks to answer:

While stretching to the full the constructive and expressive potential of electronic, telematic, and interactive digital media, how might the T-Node pursue developments in post-biological research, molecular engineering, neuro science, and nanotechnology, while identifying artistic and spiritual strategies that optimise human capabilities, and seed new visions of a planetary society.

The T-Node has a transdisciplinary perspective which seeks the integration of art, science, technology, and consciousness research within a post-biological culture, and is involved in advancing the parameters of creative practice in consort with developments in telematics, Mixed Reality, Alife, architecture, hypermedia, agent technology, nanotechnology, transgenics, data imaging, intelligent environments, generative music, technoetics.

It is a community of closely connected doctoral candidates and graduates, post-doctoral researchers, advisors, associates and supervisors. These high level professionals are committed, through collaboration and shared discourse, to pushing the boundaries of their art. For these reasons the level of research is extremely high and the methodologies employed are extensive and rigorous.