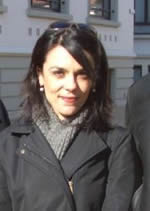 My research investigates the tools and methods of new media art from a feminist postcolonial perspective, in order to question the idea of boundarylessness, which usually animates the discussion on new technologies.
I will analyze works by individual and collective artists that explore the connection between issues such as hybridity, nomadism, location and dislocation, and the material and symbolic effects produced by new technologies on embodied – gendered as well as racialized – subjects. In order to do so, I will focus on new media artworks – like video, digital and net art, experimental theatre and performance – that either take place in or give voice to postcolonial realities and border situations.
Particularly, I am interested in exploring the ways these works:

a) read the transformations of the embodied subjects in technoscapes, while not dismissing their multiple cultural and historical legacies and locations; b) contribute to link deterritorializations and ri-territorializations to existing material configurations and negotiations of space and the body; c) create material as well as virtual networks throughout politically informed artistic actions.

She is a Ph.D. candidate in Computing, Communications and Electronics at the University of Plymouth (Planetary Collegium), Uk/Milan Node (Milano, Nuova Accademia di Belle Arti).
Her research programme titles Feminism, Postcoloniality and New Media Theory and Practice and focuses on feminist artistic practices and the new media in a postcolonial perspective.Her interests center on art history criticism and feminist aesthetics, feminism and new technologies, postcolonial studies, cultural and visual studies. She is Lecturer of Storia e metodologia della critica d’arte and Fenomenologia delle Arti Contemporanee at the Academy of Fine Arts Abadir, Palermo, and teaches Art History in High School. She graduated with a degree in Literature and Art History from the University of Palermo, Italy, and then studied feminist art criticism and gender issues in a postcolonial perspective at the Department of Women’s Studies of the University of California at Berkeley, U.S.A. She also attended the European Summer School in Women’s Studies from an Interdisciplinary Perspective (Noise) coordinated by the Utrech University and directed by Professor Rosi Braidotti.She works for the European Community project Technédonne in Bologna, and writes for the online magazine www. technedonne.it. She also contributes to such Italian journals as Cyberzone and Duellanti. She has published L’arte al femminile. Percorsi e strategie del femminismo nelle arti visive (Studi Culturali, Il Mulino, 2005), on feminist theory and practice in the field of visual studies. She is currently editing a reader on Feminist Aesthetics and Postcolonial Studies for Utet Università, Turin (forthcoming, Fall 2007). She has widely presented her papers in European conferences.