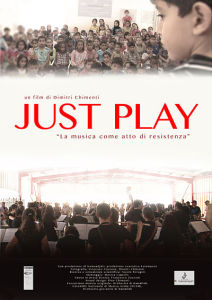 Ars Academy Research is proud to announce that “Just Play” by the Ars Academy teaching fellow Dimitri Chimenti has been awarded at the 10th edition of Al-Jazeera Documentary Film Festival in Doha, the most prestigious documentary festivals in the Arab world.

Just Play is the story of Al Kamandjâti, a cultural association that for 10 years has been teaching music in a large territory, from the refugee camps of Lebanon arrives to the Gaza Strip. This film explores the hopes, the views and lives of these men, women and children who make music a means of freedom and liberation. This film crosses their worlds to answer complex questions and fundamental: what is the point playing Bizet between the bars of a checkpoint? Why an orchestra challenge an army? What is at stake?